Jump to the proposed rules: general, for 5e or for B/X. 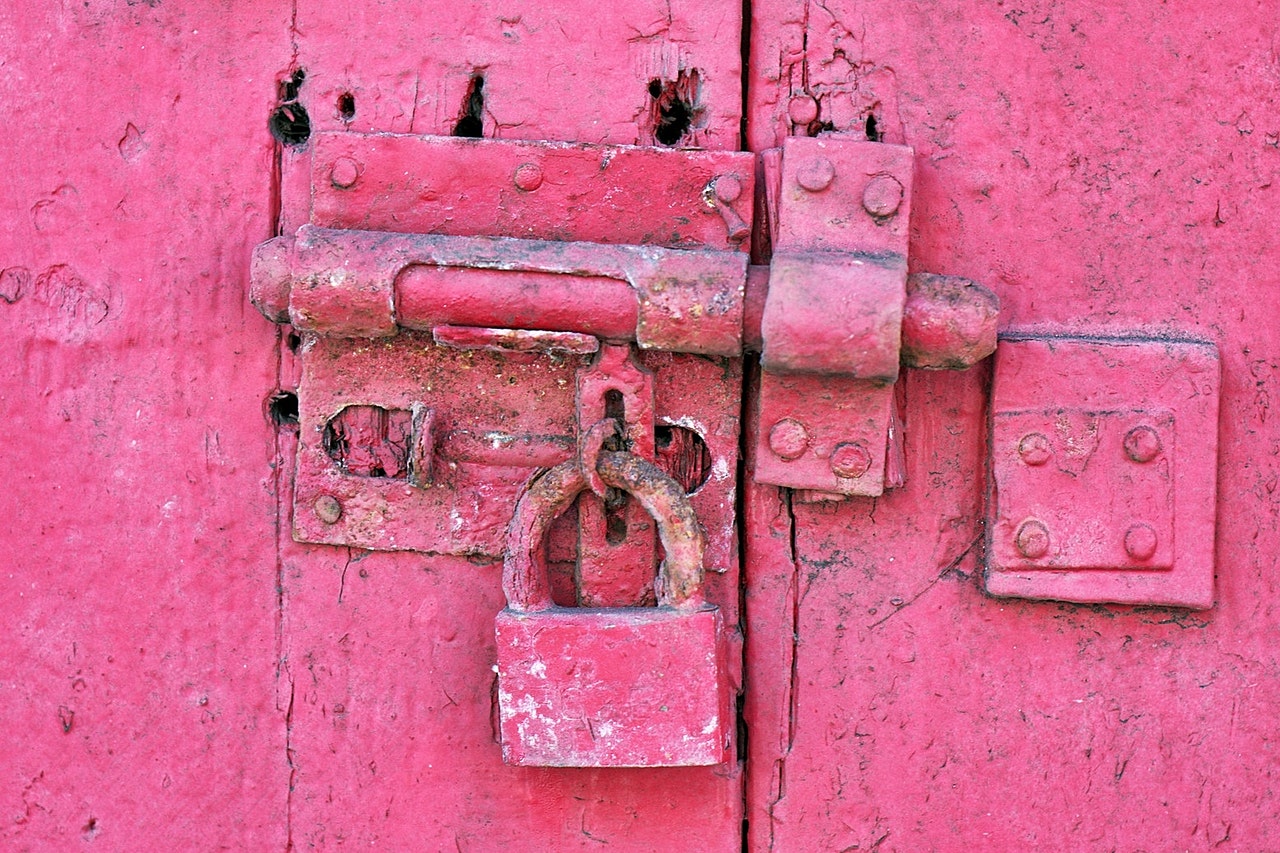 In Errant by Ava Islam (itself the spawn of these rules from Telecanter), each lock requires a specific combination of actions: either twist, tap or turn, none of which are used consecutively. The would-be locksmith tries to guess the correct combination one action at a time. When they first pick a wrong action, it causes the lock to [feel] stiff. If a wrong action is performed on a stiff lock, the lock is jammed.

Thematically this is great fun, and combined with rules that certain kinds of locks share a combination, there’s a nice knowledge-collection and player skill component as well. Telecanter’s version has a bit of problem with probabilities—the rules for stiff locks are too permissive, so that the overall chance of success is 2/3 and the second and third steps don’t matter at all—but Errant fixes this by allowing only one wrong action across all three steps. This results in an overall 1/3 chance of success in the basic case. I think it helps to see this procedure visually: 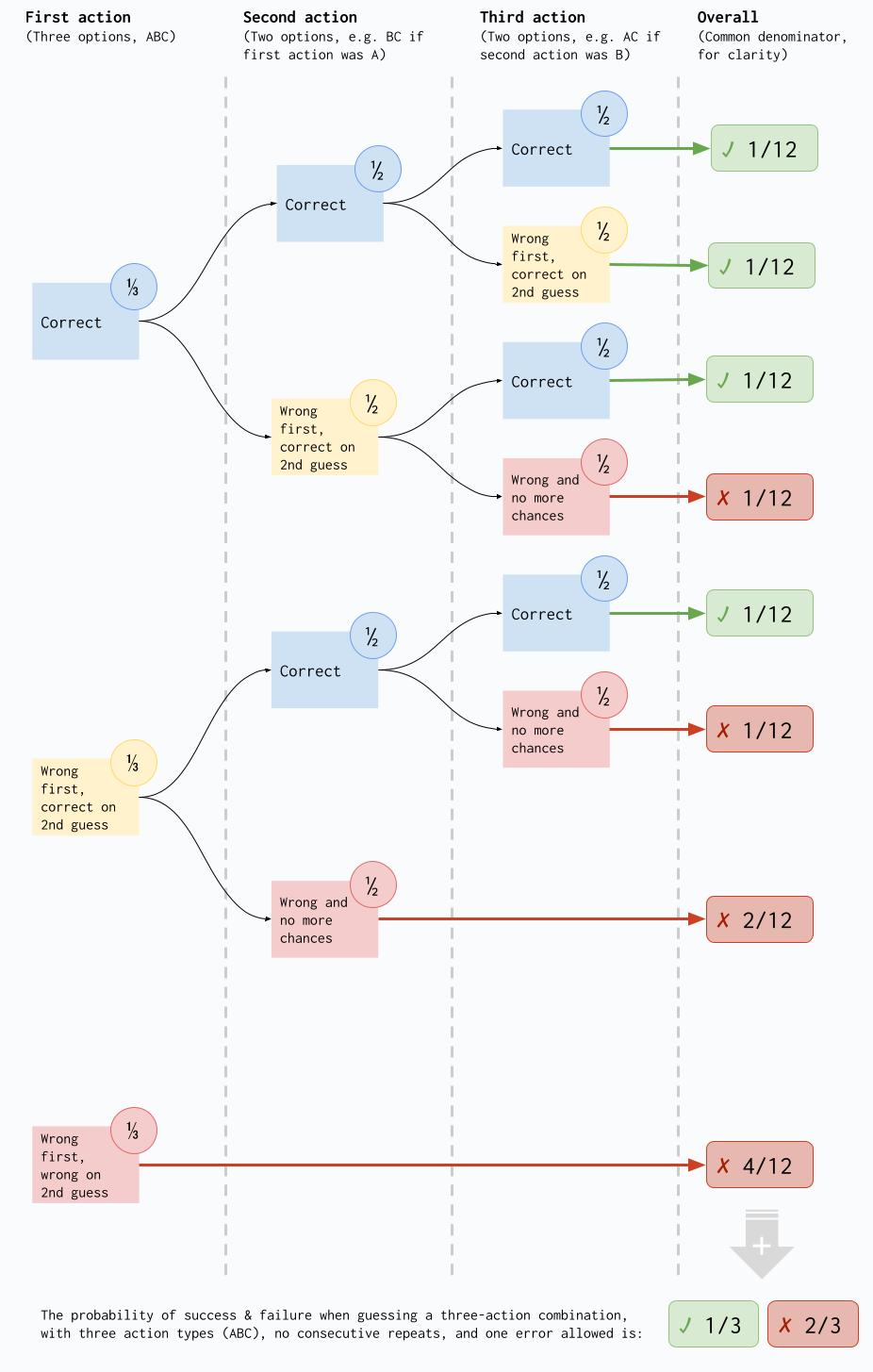 Flow chart of outcomes in the Errant version of the minigame.

Errant includes modifications to the game for locks of varying quality, but W.F.’s addition is reincorporate character skill:

[To] integrate it more fully into a rule system with stat-based d20 tests[, …] have the wannabe burglar make a moderate Dexterity test at the onset, with the following results:

Modifying the game to reflect character skill is a great idea, and the chance of success does vary: The “failure” case is identical to the original game (a 1/3 chance of success), while the chance goes up to 1/2 on a partial success and 3/4 on a full success, although we also have to take the likelihood of success on the Dexterity ability check into account:

Lydia Rainier is 3rd level, with thieves’ tools and a +3 Dex mod, for a total of +5 vs a moderate Dex check of DC 15. Per the optional rules in the DMG, we’ll treat 13–14 as a partial success. With a straight check, Lydia has a 65% chance of success (critical, full, or partial) and opening the lock. With the addition of the minigame, their chance of success goes down to 57.5%.

Years later in-game, Lydia gets +9 on the same check (from a higher Dexterity and proficiency bonus). With a straight check, Lydia has an 85% chance of success (critical, full, or partial) and opening the lock (+5% for each additional modifier point). With the addition of the minigame, their chance of success goes down to 65.83̄%.

You could argue that this difference will be offset by player skill, if Lydia’s player has been keeping track of similar locks and their combinations, but if we’re going to complicate the procedure to incorporate character skill, then +4 difference in modifiers should net more than a paltry 8.3̄% (1/12) improvement in success rate.

Fortunately, we can preserve the probabilities of the ability check by creating variations of the minigame, each with a different chance of success. I ran some simulations and eventually came up with the following, keeping the basic structure of the game unchanged.

A lock takes three steps to open. At each step, the correct action is tap, twist, or turn, and the same action is never used consecutively. Wrong actions (errors) cause the lock to become stiff and eventually jam. You can’t start over, but you can give up without jamming the lock and try again later if you gain useful information.

Versions by chance of success

Note that the original game from Telecanter (with the rule that allows one error per step) has the same probability as if we allow two global errors (Version G). I think allowing two global error is more interesting, though, since all three steps can be dramatic—if the burglar uses up both errors on the first step, they can still choose to continue, but the pressure is on and their chance of success has dwindled. Errant’s default is Version E, and the rules from Prismatic Wasteland include E, F, and H.

These rules variants give a pretty good spread across the probability space. (All we’re missing are 5/12 and 7/12—let me know if you think of a way to include those that can be explained in one sentence.) Character skill and lock complexity can now be represented by the number of errors the burglar can recover from before the lock jams, and the options they’re able to eliminate without using up a guess. If you wanted to, you could stop here and have a nice little self-contained system: The group selects an appropriate difficulty (based on the character’s skills and circumstances and the quality of the lock), the DM secretly writes the correct combination, and the player can attempt the minigame. (Maybe a candidate for MOSAIC Strict?) But in the spirit of the Prismatic Wasteland post, let’s graft this minigame into D&D—first 5e, then B/X.

There are many factors that affect an ability check in 5e: the character’s ability modifier, their proficiency bonus, and the DC. Fortunately, bounded accuracy ensures that bonuses will almost always be between 0 and 11, and round DCs have common interpretations. This gives us a compact cheat sheet for success rates on ability checks, each of which maps (more or less) to one of the minigame versions above:

Ability modifier to % success and minigame version by DC

Shift up or down a letter for advantage/disadvantage.

Welby Goodbarrel, a nimble (+4 Dex) 4th level Rogue with thieves’ tools (grants proficiency bonus, +2), want to pick a well-made (DC 20) lock. Instead of calling for an ability check, the DM looks up the odds of success for a d20+6 roll vs DC 20. It’s 35% and maps to lockpicking minigame version E. The DM secretly selects a combination and says, “Guess the combination to open the lock. One mistake will make the lock stiff, and a second will jam it.”

This might seem like a lot of table lookups, but in practice you probably only have a couple of characters who’ll attempt to open locks, so for the character in this example, I could jot down, “Easy→I, Medium→F, Hard→E, V.Hard→A” just like one might do for passive perception.

Thief skills are already percentage-based, and there are no modifiers for different qualities of locks, so it’s straightforward to map to minigame versions. Note that the easiest version (K, three errors allowed) only has a 92% chance of success, so you may want to revert to a % chance at level 12–14.

The usual caveats for how to think about thief skills apply here; see Robert Fisher’s “On thief skills in classic D&D” and “The B/X Thief is Good” from Gorgo Mormo, and only call for a roll (or minigame) when the lock is challenging and failure would be interesting.